Everyone who uses Facebook gets ticked off at them every now and again. Too many rules, too much political correctness, heaps and tons of unvetted advertisers, etc etc. A few months back I decided it was time to make a change and started shopping around for another platform. Some years ago I truly enjoyed Facebook but they’ve gotten too big for their britches. And then the other day I evidently broke one of their precious rules and got banned for 24 hours, plus a few other arbitrary “punishments” to keep me in my place. That was the straw that broke the camel’s back. I won’t be punished by a bunch of meddlesome retards just for speaking my mind. There are other forms of social media. I don’t need Facebook any more than they need me.

But let’s spend just a moment on the phenomenon that is Facebook. Facebook has become a global power with billions of users and billions of dollars. Many people become addicted to using Facebook and can’t take a good dump without the app open in the restroom. It gets embedded in our lives and it’s hard to get rid of. Over time I’ve found myself using it more and more.

One’s reasons for using it don’t have to be unhealthy. As a long-haul trucker I travel all over the 48 contiguous states. I see a lot of places and things others don’t get to see. So I take just a bunch of pictures and post them on Facebook. Many of my friends and family look forward to the images I share. I enjoy sharing what I do and giving others a quick smile. It’s gratifying.

But I see people who air their dirty laundry on FB for all to see. They badmouth their in-laws or their employers and then act all surprised and indignant when real-world consequences arise. We all have a certain amount of drama in our lives. But why share it? If I’m having a fuss with a family member why the hell would I plaster it all over social media? Personal drama should remain private. Period.

And FB obviously doesn’t care if its users get ripped off. Some months back I began blocking every advertiser in my phone app (FB Purity handles this on my PC). The more I blocked, the weirder the ads became. If you’re curious you can see a bunch of the questionable ads in an earlier post. 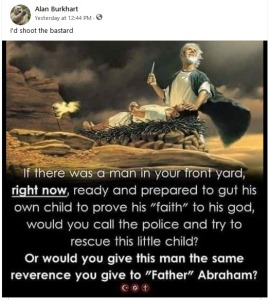 So anyway one of the FB groups I belong to posted this meme that asked a simple question: If you saw a guy in your front yard who was about to sacrificially murder a child like Abraham supposedly almost did, what would you do? I shared it and provided an honest answer. I said, “I’d shoot the bastard.”

Now before you anti-gun types get all lathered up, ask yourself what YOU would do. The kid is tied down to the altar. The maniac has a knife and he’s about to gut this poor kid. No amount of reasoning with the guy is going to help. There is no time. Seconds matter. To save the child, you kill the murderer. Bang. Problem solved. Unfortunately FB disagreed with my reasoning.

Back a few months ago I had been debating some guy over… something. I don’t remember what it was or how I ended up in the debate. But he was behaving like a little bitch, and as such I called him one. I don’t normally engage in name-calling but I was growing frustrated with the guy. FB sent me a notice that I was accused of “Bullying and Harassment.” Which tells me this little bitch evidently leads a fairly sheltered life. 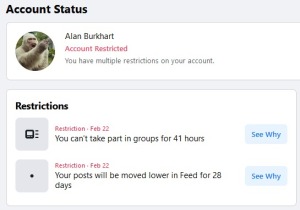 Anyway with these two counts against me FB decided that I’m a bad citizen. I was blocked from posting or commenting for 24 hours. If they’d stopped at that I’d have just laughed it off. But no, I also got a 48-hr ban from interacting with any groups to which I belong, and for 30 days my content is “moved down” in news feeds so I’m less likely to be seen by my friends. This made up my mind that it’s time to dump FB and move to a more mature platform. Presently I’m lurking about on Reddit. I think I’m going to like it. Tremendous diversity of content and opinions. And it’s arranged by topic so it’s pretty easy to navigate.

I’ll be on FB probably another couple of weeks until I get home. Then I’ll connect to WiFi and download all my FB content. After that I’ll leave a “fond farewell” post up for a few days with a link to wherever I end up. And then I’ll delete my account. FB won’t miss me. I’ll just be one less fly on an elephant’s ass. The elephant won’t notice the difference. But I’ll feel better about myself for having removed this mental parasite from my life. And of course there’s my tiny little blog here. I don’t get much traffic but the few of you who follow me are greatly appreciated.

Okay that’s it. Feel free to chime in if you have any suggestions or opinions. And if you disagree with me feel free to say so. Just don’t be a little bitch about it.

This site uses Akismet to reduce spam. Learn how your comment data is processed.

I consider myself a free thinker and as such, I'm skeptical of just about everything. I've discovered over the years that the truth is often found in the unlikeliest of places. I don't claim to be an expert on anything. But I do enjoy sharing my thoughts. Your thoughts are of course welcome as well.