I’m really getting sick of the BS revolving around the Covid-19 pandemic. Let’s be honest with each other and ourselves for a moment: Yes, the virus is real. No, it’s not some made-up story. And did the Chinese release it intentionally? Maybe, maybe not. That’s for the US intelligence community to decide. What matters to me is that it’s real, it’s here, and it’s hurting people.

It’s embarrassing to see how America has reduced it to a political football (like we do everything else). And as always with politics we have to sift through the bullshit and finger-pointing to find the facts. Absent agenda-driven political considerations, the facts would likely be obvious and easily understood. But no. Not in America. The rest of the world must be wondering WTF happened to us.

Two members of my family are presently recovering at home from the virus. A 2nd cousin of mine died from it a few days ago. Three other family members have just recently recovered. Two close friends at work had it. They both said it was the sickest they’d ever been. I worry that my sweet little gray-haired mother, who turned 100 years old last May, would not survive if she contracted the virus. Thus far I’ve not had it. Given my own health issues it’s a point of concern. I’ve had the vaccination (Pfizer) so I’m hoping to dodge that particular bullet.

But On To The Politics…

As of this writing the left’s current scapegoat is podcast host Joe Rogan. CNN’s Jim Acosta – not the most credible journalist out there – is deriding Rogan, accusing him of “taking horse dewormer” for Covid-19. The simple fact of the matter is that Rogan has a prescription for the “human version” of the drug and it appears to be working for him. But Acosta is not one to let facts get in the way of his (ahem) “reporting.” 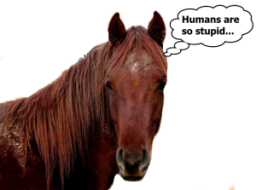 The far right is engaged in dreaming up conspiracy theories, faux science and name-calling. Recently they’ve been referring to masks as “face diapers.” In other words they’re behaving like the over-aged juvenile delinquents they’re known to be. Both sides make me wonder how much longer humanity can survive its own stupidity.

As is typical of the American political Left and Right, they’re completely polarized on the issue. One side says to take the vaccine to the exclusion of all else. The other seems to believe that we should take anything but the vaccine. Forgive me for doing so, but I wish to apply some non-political, common sense thought to this.

So what’s wrong with the idea of getting the vaccine, and if you get a “breakthrough” case of the virus, using other approved drugs to treat it? If you get a flu shot and still get the flu, you’ll take whatever drugs the doctor tells you to. Why would it be any different with Covid-19?

I’m not suggesting that you run to the local veterinarian and buy the version of Ivermectin intended for deworming horses. But some doctors are in fact prescribing smaller-doses of the drug to treat humans. It’s already being considered for treating malaria in humans.

Reports from in vitro studies suggest that ivermectin acts by inhibiting the host importin alpha/beta-1 nuclear transport proteins, which are part of a key intracellular transport process that viruses hijack to enhance infection by suppressing the host’s antiviral response. In addition, ivermectin docking may interfere with the attachment of the severe acute respiratory syndrome coronavirus 2 (SARS-CoV-2) spike protein to the human cell membrane. Ivermectin is thought to be a host-directed agent, which may be the basis for its broad-spectrum activity in vitro against the viruses that cause dengue, Zika, HIV, and yellow fever. Despite this in vitro activity, no clinical trials have reported a clinical benefit for ivermectin in patients with these viruses. Some studies of ivermectin have also reported potential anti-inflammatory properties, which have been postulated to be beneficial in people with COVID-19.

Dr. David Boulware of the University of Minnesota says the drug’s side effects are mild at two or even three times the usual human dose. But formulations for farm animals might contain 1,000 times what’s safe for humans.

My point is that treatment doesn’t have to be either / or. Ignore the bleating and blathering on Fox and CNN and consult someone who actually knows what you need – a doctor. And if that doctor starts waxing political, run away as fast as you can. Find another doctor who’ll examine you and apply real science to helping you. And unless you have a legit medical reason (there are no legit religious reasons, btw) to avoid the vaccination (primarily allergy issues) you should get the shot. Data suggests that women who are pregnant or lactating should get it as well, and that it’s safe for their baby.

The virus doesn’t care how you vote. It doesn’t care where you get your news. It doesn’t care about your religious beliefs. If you’re exposed, you at the very least become a carrier. So cut the crap, wear the mask and get the shot. And if you wish to augment the vaccine with supplements, that’s cool, too. Consult your doctor for recommendations. Your doctor. Not your horse’s doctor.

This site uses Akismet to reduce spam. Learn how your comment data is processed.

I consider myself a free thinker and as such, I'm skeptical of just about everything. I've discovered over the years that the truth is often found in the unlikeliest of places. I don't claim to be an expert on anything. But I do enjoy sharing my thoughts. Your thoughts are of course welcome as well.